Once again, Nancy (her husband) has made a trading move with unbelievable timing.

They sold all their Nvidia shares right before Nvidia surprisingly released a terrible earnings report without any notice. 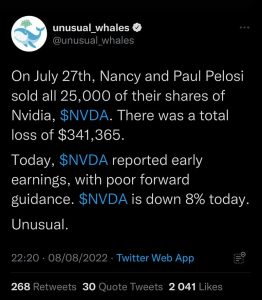 Nancy Pelosi’s net worth has been estimated at $100 million – and it’s all thanks to an incredibly savvy stock picker – her husband Paul Pelosi.

Nancy Pelosi doesn’t trade or own stocks, it’s her husband Paul who manages their stock portfolio.

⭐ Fun fact: Nancy and Paul are often called the Bonnie and Clyde of investing.

As a high figure in Congress, Nancy has been responsible for regulating many of the big companies that her husband has invested in. And it has been argued that she has shared some of her knowledge with her husband, which allowed him to make well-informed stock market bets.

Nancy Pelosi has been in Congress for a long time, and much of her wealth is tied up in real estate properties. The only assets that Nancy has reported owning or co-owning were her home in California and a bank account containing $15,000.

But together with her husband, she has also made some savvy stock investments, and it’s worth looking at the history of their stock portfolio.

Nancy Pelosi has traded stocks with her husband for many years. She purchased her first shares in 2003 at the age of 67, according to a Bloomberg report.

By 2017, she owned approximately $1 million worth of stock in IBM and Apple alone. That year alone, she earned more than $100,000 from dividends and gains on their investments.

In May 2019, it was reported that Congresswoman Pelosi had an estimated net worth of over $75 million – making her one of the richest members of Congress.

Below are some of the current biggest positions in Nancy and Paul’s stock portfolio that she had to disclose following the new STOCK Act, which requires members of Congress to disclose their trading activities.

Portāls STOCK Act requires the trades to be reported no later than 45 days after they have been made, but Nancy is a diligent woman and usually reports them 1-5 days after the trade date. 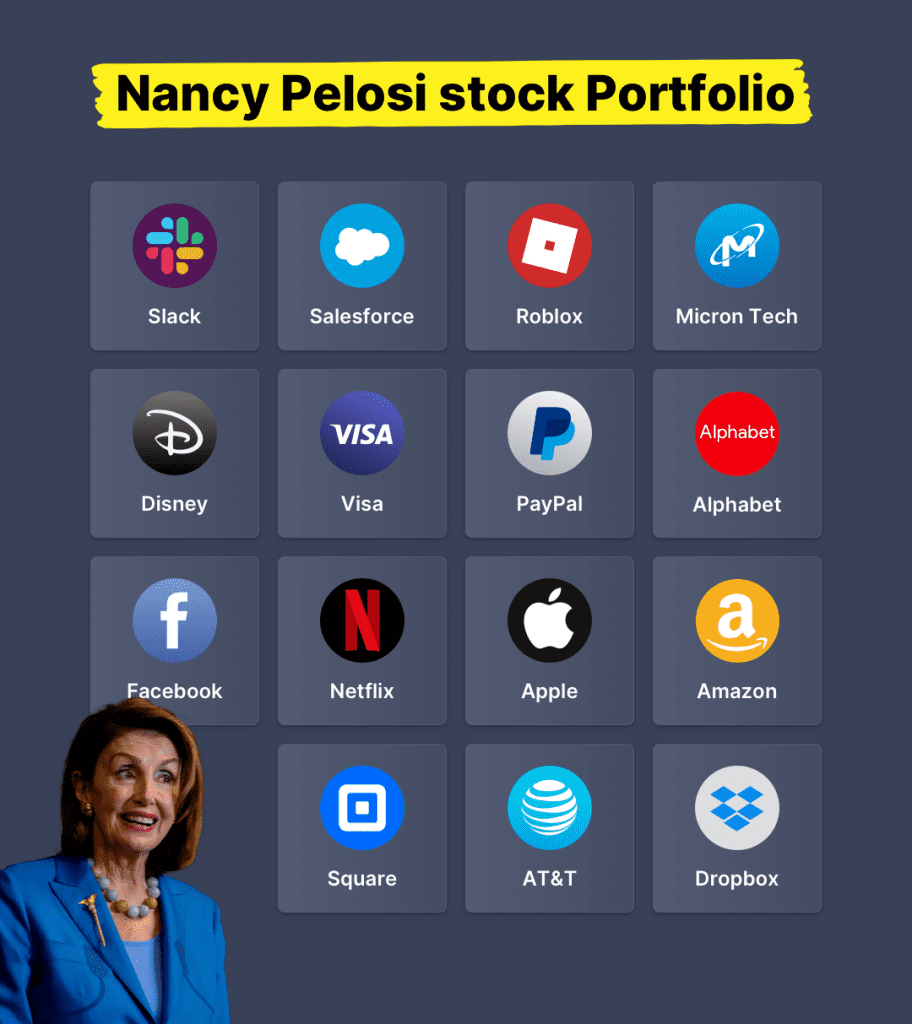 As you can see, most of these are well-known boring tech stocks.

However, one stock that stands out is Roblox. Roblox is a free-to-play video game that was released around 2006 that allows players to build games and worlds in a lego-like aesthetic for themselves and other players. The majority of Roblox users are aged 9 – 12 years. Additionally, 25 percent of Roblox users were under the age of 9. 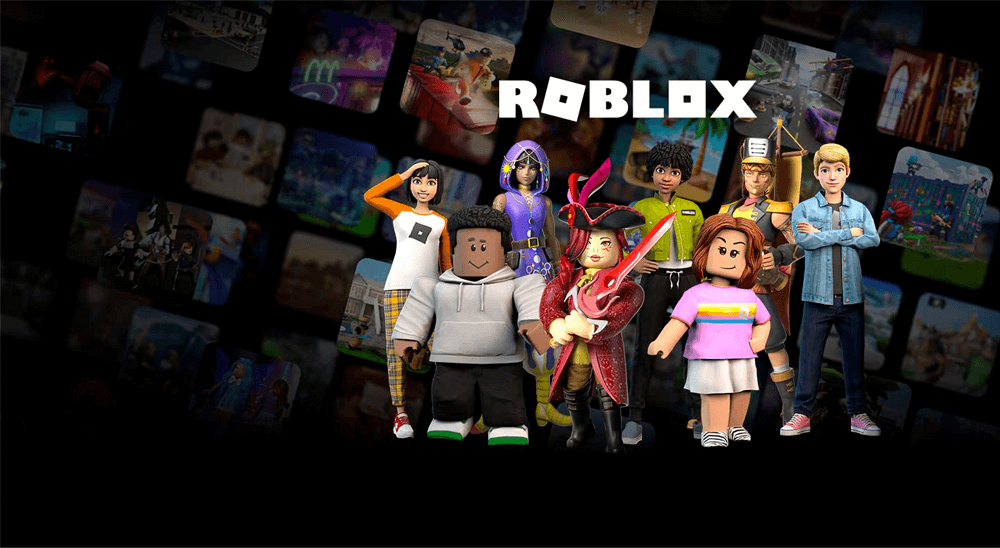 So it’s not exactly Nancy’s type of game. But it doesn’t mean it’s a bad investment (in theory).

In the first quarter of 2021, Roblox reported a +140% revenue growth. They had 42 million daily active users and 9.7 billion hours spent on the games by their users. Furthermore, Roblox is a top contender to become the most popular metaverse platform, so the growth opportunity is huge.

However, despite the potential of Roblox, this trade has been going unsuccessfully so far for the Pelosi couple. 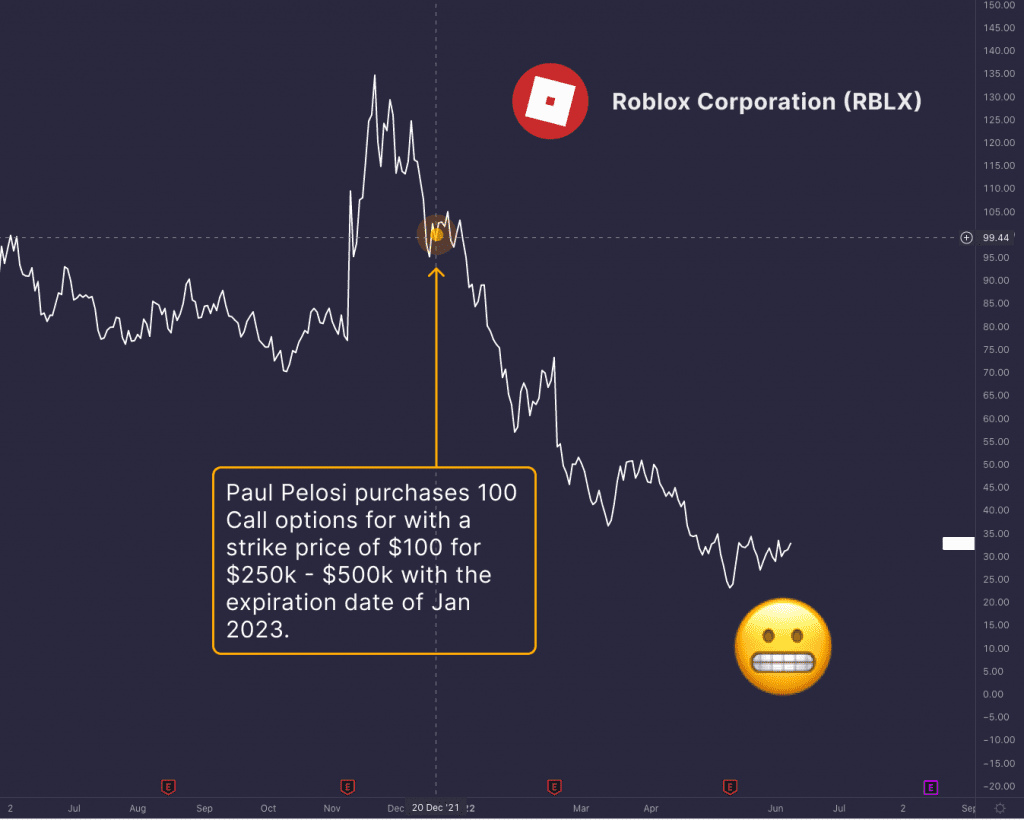 As you can see in the chart above, Roblox stock price has made some significant losses after Paul bet on its rise. But it might change the course until the expiration. Anyway, it shows that they are not wizards and don’t always buy at the lowest price.

How can you take advantage of Nancy’s insider info?

Thanks to the Stock ACT, you can see the trades of politicians. The members of Congress report their trades 5 to 45 days after they make them, so sometimes following the reports can provide valuable signals.

Where can you see these trades?

We have listed several sources of insider trading reports in this article. 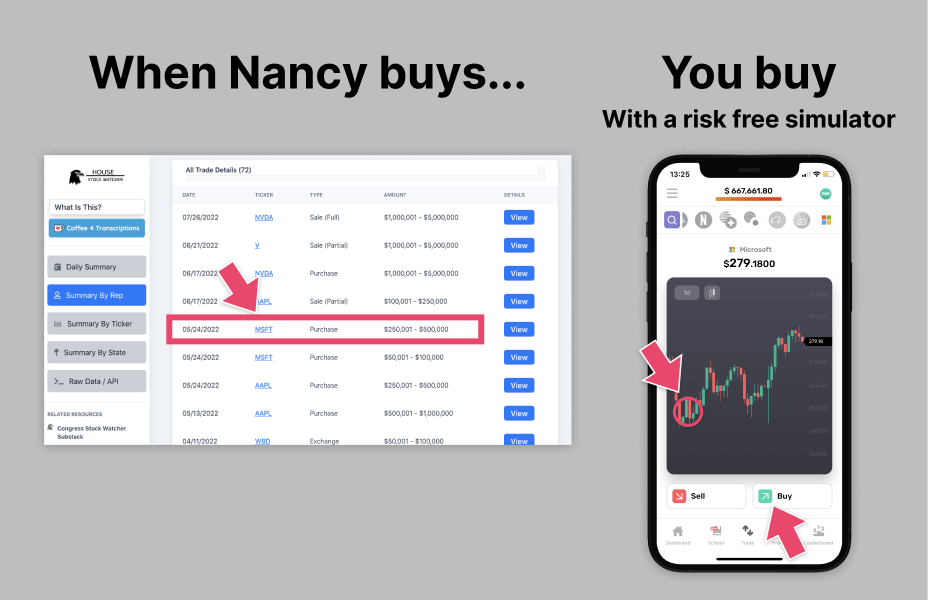 When you spot Nancy making a trade you like, you can copy her trade with zero risk with our free stock trading simulator app. When you download the app, you’ll receive $100,000 of game money to create a virtual portfolio of stocks, gold, and crypto.

The prices are real and live, so you’ll get the real deal, only without the risk of losing your hard-earned money.

The app allows you to test different strategies in a 100% safe environment and also compete with other traders on the weekly leaderboards.

Two particular trades made by the Pelosi couple have caused the biggest resonance on social media. Both of them show suspicious signs of amazing timing.

Back in 2021, Paul Pelosi almost miraculously bought the Nvidia stocks just a month before the general public got the info that the US government was planning to buy supercomputers made with Nvidia and AMD chips. Such an event is likely to shoot the share price up. Which it naturally did, after a slight drop. 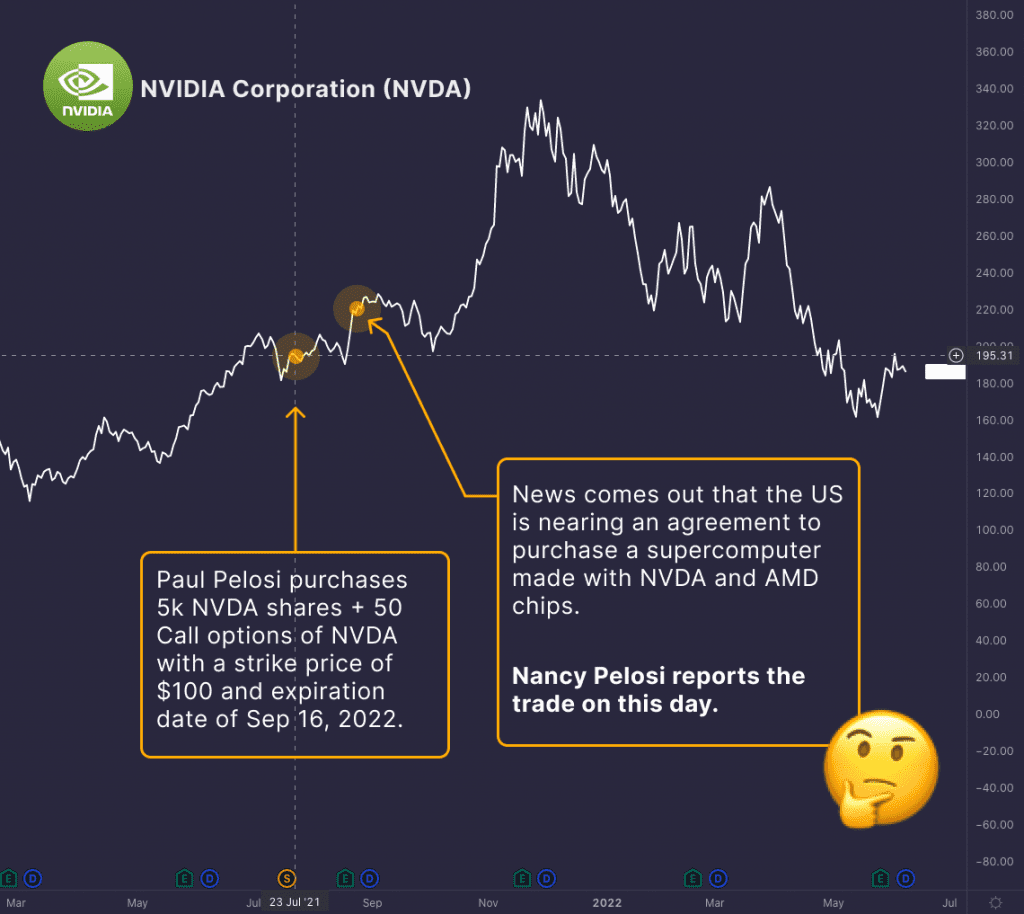 Another incredibly lucky (or suspicious) trade happened on May 24, 2022, when Paul bought Apple and Microsoft stocks precisely on the bottom (or swing low) of the NASDAQ market.

If you have read the books of legendary traders, you will know that timing the market bottom is one of the most difficult things, which nobody recommends even trying. Yet Paul somehow did it. 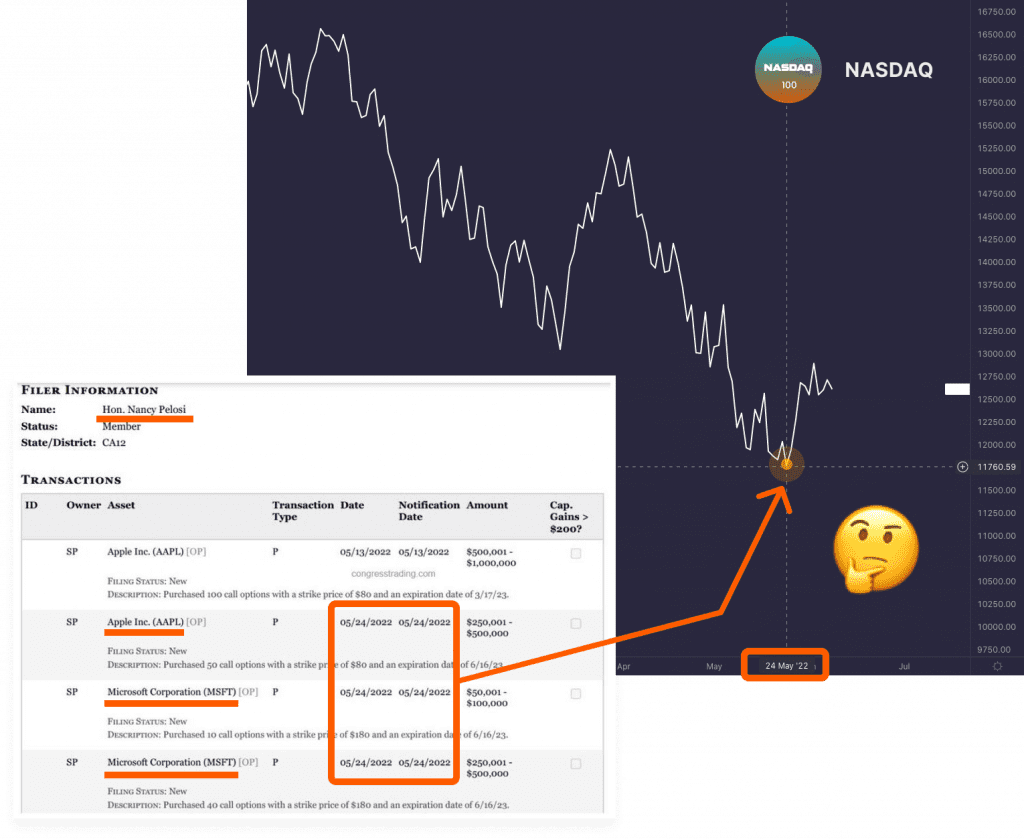 One interesting aspect of these trades is that they were reported on the same day when the transactions were made.

This is perhaps because of the increased public scrutiny. Anyhow, that’s a good sign as it opens up the possibilities for us retail traders to use these trading signals.

Paul Pelosi started his career as an accountant for Coopers & Lybrand before becoming the vice president at Salomon Brothers Inc., where he worked from 1973 to 1982.

Paul made his fortune in real estate development and venture capital during the 1980s when San Francisco was booming with tech companies like Intel and Apple Computer Inc., which helped grow their local economy into one of the strongest in the nation.

In addition to his role as president of Financial Leasing Services Inc., he also served as chairman of Mission Hospital Foundation’s board of directors until 2011, when he resigned following accusations of influence peddling within Sacramento politics (though these allegations were never proven).

Nevertheless, Mr. Pelosi remains active on boards such as the San Francisco Museum Of Modern Art Foundation, where he serves as co-chairman alongside his wife Nancy—who incidentally graduated from the University Of California Berkeley with an undergraduate degree in political science before going on to earn a law degree from Georgetown University Law Center!

The couple has been married since 1963 after meeting while both attending UC Berkeley: long before either had achieved success as politicians or businesspeople! They currently reside together in Pacific Heights above San Francisco Bay, where they’ve lived since 1965.

Paul is a seasoned trader, and he is not only investing in stocks. He is also actively trading stock options.

Why? Because stock options allow using leverage of up to 50:1. Put simply, it allows making 50X more than traditional stock trading.

However, if such an options trade goes against you – you lose 50X more. Leverage is a double-edged sword.

But if you have an informational edge – trading options can be a great way to use that advantage.

Here are some of Paul Pelosi’s stock option trades: 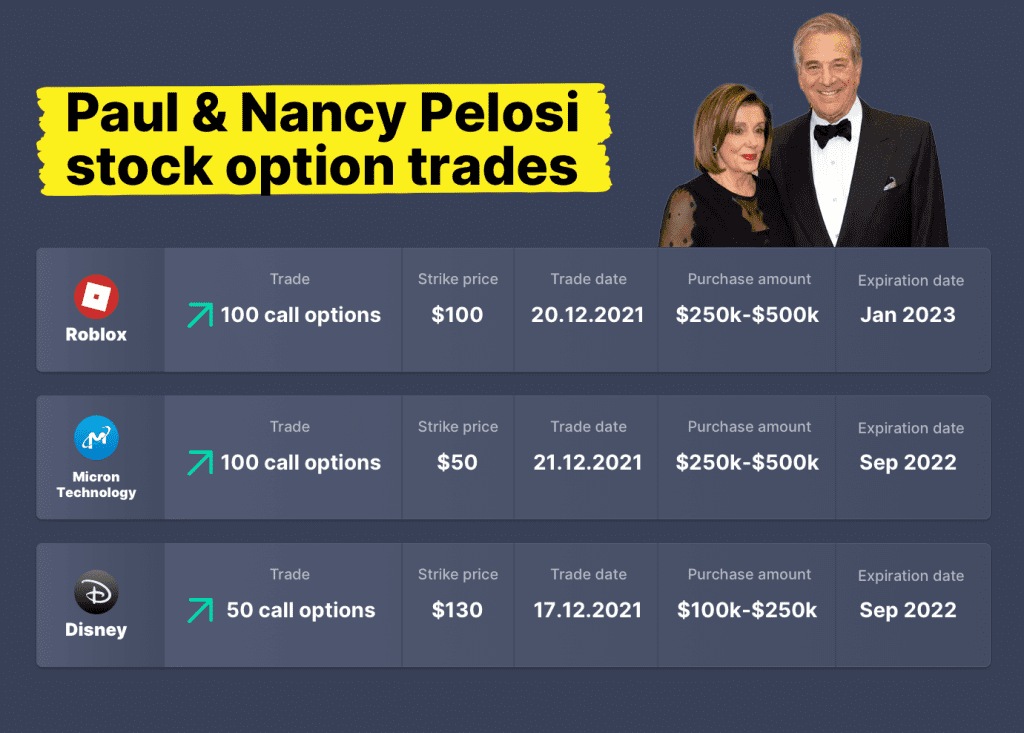 What are stock options?

An option is a contract that allows (but does not oblige) you to make a trade at a fixed price at a future time.

There are two kinds of options:

Stock options can be bought and sold on exchanges just like regular company shares. Options can be used in many ways, for example, as a hedge against a future price drop ((by buying put options) or as a bet that its price will have increased by the option’s expiration date (by buying call options).

1. If you’re a trader, it’s good to have a wife in Congress.

Many of the companies that Paul Pelosi has been speculating on (like Alphabet, Facebook, Netflix, etc.) together spend tens of millions of dollars each year lobbying the US government (including Nancy).

Besides information directly connected to large companies, the members of Congress might get early info about planned stimulus checks, inflation numbers, monetary policy measures, etc. Having such info before others can be quite useful for trading and investing.

It must be incredibly difficult for Nancy not to share any market-related insider info with her husband. With or without Nancy’s insights, in the last years alone, Nancy and Paul Pelosi have made ~$30 million from bets on the Big Tech firms Nancy Pelosi is responsible for regulating.

2. Trading is hard even with the insights of a Congresswoman.

The Pelosis have shown some suspiciously perfect timing which is hard to achieve without insider knowledge. Yet they don’t always win. They’ve made significant losses with Nvidia, Roblox, and other assets. Their losses confirm the fact that speculating on stocks is harder than most people think.

The US government is on track to ban Congress members from trading in general, despite Nancy’s alleged initial reluctance to move the bill forward.

As a result of the new bill, insider trading will get much riskier and harder.

Perhaps that’s why it has been booming lately, as they’re trying to use the last opportunities.